What is The Undoing Chronicles?

The prophecy says Sachi’s death will be the catalyst for the Undoing. It doesn’t mean she wants to die, but the Kashtophim slaughtered her entire race, and death seems to be the only thing left. But everything Sachi thought she knew about the Kashtophim changes after a chance encounter with Taphim, the head judge, as she infiltrates the capital city.

Haunted by the blood on his hands, Taphim is desperate to save Sachi. She believes he is only delaying the inevitable, and never expected they could find redemption in each other’s arms.

Then Taphim’s power hungry son, Zanis, discovers their affair, captures Sachi, and uses her to blackmail his father. Taphim must execute Sachi with his own hands and appoint Zanis as his successor, or Zanis will expose the affair, along with evidence that will incriminate Taphim’s wife, Zareja, for treason.

Trapped in a living nightmare, Taphim finds an ally he never expected – Zareja. But it may be too late to save Sachi.

The story was born over January/February of 2012 when I participated in 4-week flash fiction challenge with theme of immortality vs. mortality. Our weekly prompts were based on selections from Ode to a Nightgale by John Keats, and Hymn to Intellectual Beauty by Percy Bysse Shelley.

The flash fiction I created the first week is totally unrelated to Undoing, but the last three weeks took me completely by surprise, because a whole new world planted itself in my mind.

The quotes and prompts I worked from for those were:

Immortality comes to you, you do not go to Immortality.

“Why dost thou pass away and leave our state,
This dim vast vale of tears, vacant and desolate?
… No voice from sublimer world hath ever,
To sage or poet these responses given –
Therefore the name of God and ghosts and Heaven,
Remain the records of their vain endeavour . . .”
~ Hymn to Intellectual Beauty, Shelley

To Die, and become one with Nature.

“Darkling I listen, for many a time,
I have been half in love with easeful Death,
Call’d him soft names in many a mused rhyme,
To take into the air my quiet breath;
Now more than ever seems it rich to die;”
~ Ode to a Nightingale, Keats

But on the viewless wings of Poesy,
Though the dull brain perplexes and retarts:
Already with thee! Tender is the night,
And haply the Queen-Moon is on her throne . . .
~ Ode to a Nightingale, Keats

This is the fastest a story has ever come to life for me, and even to fruition. While I had the initial story idea early in 2012, I wrote the first draft for NaNoWriMo the same year, and immediately turned around and entered it in the 2013 NaNo Virtuosos contest with Curiosity Quills Press.

Over the three months the contest entailed, I went through three drafts of what has become the first book of The Undoing Chronicles. It is currently called Catalyst.

But it wasn’t enough to JUST enter NaNo Virtuosos. See, January is when the deadlines for the annual Oklahoma Writer’s Federation, Inc. contests roll around.

And I had a new novel I could enter, and it was a bit much for an enthusiastic writer to pass over.

I’d entered the Science Fiction/Fantasy/Horror novel category before, with my (still needing a desperate amount of revision) fantasy novel, Blood of Trees, though at the time it bore the title Weeping Willow. I didn’t place at all that year with that entry, especially because I’d made some formatting errors in the entry itself.

Let me give any writers reading this a bit of advice – if you enter contests where you receive judge feedback, take that feedback to heart. It is so very important, and is definitely one of the things that made the difference for me this year.

In the interim between entering the OWFI contests, and the awards banquet, I ended up placing third overall in the NaNo Virtuosos contest. While I did win some awesome gift cards and books through participating and make it into each round, the big recognition came from winning first place, and so that journey ended, though I do have a standing invitation to submit Catalyst to CQ. I just haven’t decided yet if that’s the route I want to take.

Because… some other things happened after that.

I made it through at least two more revisions of Catalyst over March and April of 2013. and was (I thought) ready to pitch at the OWFI conference the first weekend of May.

While I now know that my story wasn’t ready for pitching, I’m so very glad I did anyway because I accomplished two things:

As I found out later that evening, Awesome Agent was the judge for the category I’d entered Catalyst in. The same novel I had pitched to her.

And that night, I found out she’d awarded Catalyst FIRST PLACE. 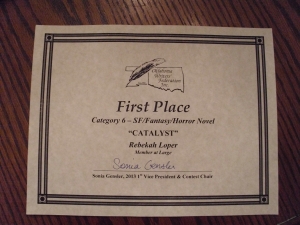 Currently, Catalyst is in another (hopefully final) round of major revision. Awesome Agent read the full manuscript, gave me some feedback, and asked that I resubmit after making revisions.

My goal is to resubmit by the end of the year (hopefully sooner, but I just need life to stop beating me over the head with a rusty shovel).

What is il-Ri Gyti?

What is Blood of Trees?